Our professional team includes practitioners who are fully accredited by the American Board of Certification in Orthotics and Prosthetics. Anchor O & P is a BOC accredited facility. Our full-service office includes a laboratory with a full-time certified technician. 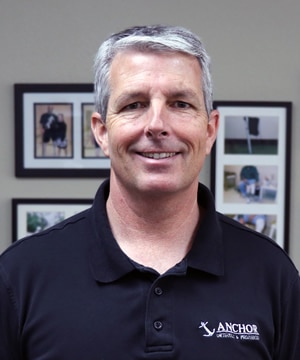 Terry McDonald earned his B.A. at California State University, Chico and his Orthotic certification from California State University Dominguez Hills. Early in his career Terry had the privilege of training extensively at Rancho Los Amigos rehabilitation hospital in Downey California where he had the opportunity to work alongside some of the pioneers of orthopedics and gait analysis, including the “Grand Dame of Orthopedics” Dr. Jacqueline Perry.

Terry began his independent Orthotic career working for Advanced BioMe􀂔hanics in Sacramento CA. Later Advanced BioMechanics was bought by a larger company which provided the opportunity for Terry to start Anchor Orthotic & Prosthetics Inc. Since this moment Terry has never looked back. Anchor Orthotics & Prosthetics has been serving patients in the greater Sacramento area for 15 years and has built a shining reputation for itself.

With over 28 years of experience, Terry has proven himself to be very skilled and creative at coming up with solutions to meet his client’s needs and has become known for his ability to treat complicated conditions such as Polio, MS, CP, Spinal Cord injuries, traumas and more.

Terry’s unique abilities and kindness toward clients has made him successful in his field. Terry has thrown fund raisers to help his clients in need and driven hours out of his way to work on animals—yes, Terry treats animals, dogs, alpaca, horses, and other animals as well. Terry has lectured on many topics In the Orthotics and Prosthetics field to medical professionals, university students and faculty, and high school students.

Outside of being an Orthotist Terry enjoys an active lifestyle with his wife, children and friends doing whatever the seasons bring, from hiking to biking to skiing and more. 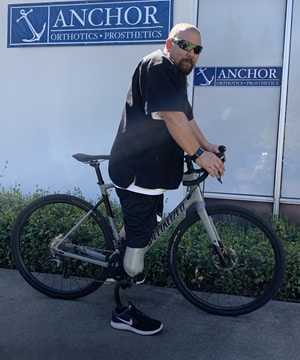 Jay, as an amputee, became a RBKA June of 2015. His passion is to help other amputees and their families by providing support, tips and advice. He had no one there to help or assist him through his process, so wants to help others and let them know that they are not alone.

Jay is a peer support/care coordinator he goes to meet people when they are at the hospital, care facility, or even their residence that have or are getting ready to face amputation and shares information on what to expect after amputation along with his own experience as an amputee.

He spent almost 7.5 years in a wheelchair but was back on his feet just 1.5 months after amputation. In the workplace Jay enjoys the fact he gets to assist other amputees and see the reaction of excitement on their faces when they are able to stand tall and even walk for the first time since amputation. It gives him great satisfaction knowing he was a part of that journey in their life.

Jay enjoys doing anything he can with his two feet, whether its just walking to the store for a gallon of milk to riding his bike from South Sacramento to Folsom and home (52 miles) 1-2 times a week to have lunch with his wife. He enjoys playing basketball with the fellas and golfing with his brother and friends. Jay also likes to attend as many amputee clinics and events that are held locally or even in the Bay Area and strives to get other patients involved as much as possible. Jay is also a season ticket holder for the California Golden Bears… GO BEARS! 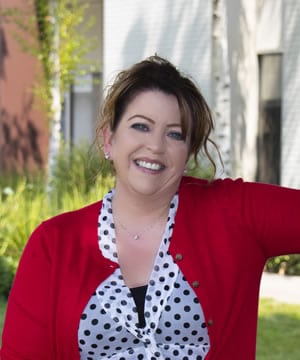 I’m an administrator for Anchor orthotics and prosthetics and I love my role here. I have been working in the medical field for 30 years, and have been and LVN since 1998. During my time in the medical field I have also worked in the ER at UCD, AIDS clinics, Pediatrics, Family Practice, Internal Medicine, Plastic Surgery, Dialysis Nursing, Practice Management, and most recently, Administration.

I enjoy working with my team and find that my experience in the medical field is very beneficial to our patients. Many of our patients I have referred here from the vascular surgery side, and I now see them here on the prosthetic side, which I find immensely rewarding. In my spare time, my husband and I enjoy camping, concerts, our two Boston terriers, and spending time with our children. 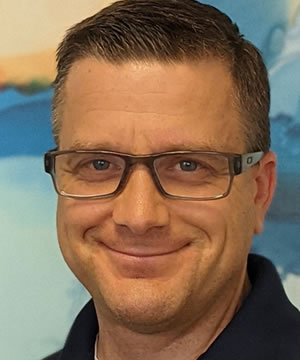 Hello, I’m Brent Benton, Certified Prosthetist here at Anchor OP. After completing my schooling at California State University of Dominguez Hills, I’ve been doing prosthetic work for over 10 years. It’s been my great privilege to witness hundreds of people take their first steps after amputation, and to play my part in making that happen: Providing a well fitting prosthesis that’s appropriate for each patient’s needs and abilities.

We will meet each other in order for me to hear your story, assess your physical condition and needs, and then to go about the business of making, fitting, and maintaining your new limb. Along the way, you’ll hear me ask, “Better, worse or the same?” I’m always trying to make it better. You’ll probably also hear me telling Dad jokes. I’m a Dad of two young boys, so the Dad jokes are actually required by federal, state, and local authorities!

Coming to work at Anchor is a bit of a homecoming. I lived and worked in Auburn, Rocklin, Sacramento and Stockton over the last 20 years, but I’ve been out of the area for the last seven years. It’s great to be back! I’m looking forward to meeting you, hearing your story, telling some Dad jokes and making your life better. When I’m not telling Dad jokes and trying to make people’s lives better at work, I enjoy time with my family, camping, swimming, reading, hiking and telling Dad jokes.

Give Us A Call Today!